ATO over ETCS, also called ERTMS/ATO, is the system enabling automatic driving of the train in presence of a driver, while respecting the european signalling ERTMS/ETCS, and the timetable. What are the main principles of ATO over ETCS and its architecture ? Let’s find out in this article !

If you haven’t done it yet, I recommend the reading of this article first : Introduction to Mainline ATO.

ATO over ETCS : the european autopilot

During the 1980-1990 period, a certain number of countries within Europe installed national signalling systems, to prevent accidents. This led rapidly to serious interoperability difficulties, and the idea to have a common signalling system in Europe came out.

This is how the specification and conception of ERTMS/ETCS started (European Rail Traffic Management System / European Train Control System). It’s objective is to replace all national signalling systems, and first deployments were made in the 2000-2010 period.

During the conception of ERTMS/ETCS, there was no plan to introduce an autopilot. The specification of this feature started around 2010, with users and suppliers around the table, to define what will become ATO over ETCS.

The starting point : the mission to operate

When the driver drives his train, he has to respect the mission that was assigned to him. It is the timetable : with this information, the driver knows when he has to pass a given station. The driver can then adapt the traction and braking of the train, to be on time.

The autopilot, ATO (Automatic Train Operation), has the same objective. It has to respect the timetable assigned to it. For that, the ATO can rely on a first input given to it: the Journey Profile.

The Journey Profile is a set of information, enabling the ATO to know :

The Journey Profile is the starting point. It refers to a second set of information : the characteristics of the tracks on which the train will circulate. This is the Segment Profile.

The Segment Profile contains information enabling the ATO to know precisely how to manage the traction and braking of the train, so to save energy. This information is the maximum speed of the line, gradients and curves.

How to assign the mission to the train ?

Today, the timetable is a document that is provided by the infrastructure manager (IM) to the railway undertaking (RU) and the driver. More precisely, it comes from the Traffic Management System (TMS) from the IM.

So, our timetable is available within the TMS, but how to distribute it to the autopilot in the train ?

To transmit the timetable contained in the TMS to our onboard ATO, we need an intermediate.

This intermediate is the ATO Trackside (ATO-TS). ATO-TS is a set of servers, connected to the TMS of the infrastructure manager. ATO-TS fetches constantly the up-to-date timetables from the TMS.

Within the train, we have the ATO Onboard (ATO-OB). When the ATO-OB is awake, it knows the IP address of its reference ATO-TS and opens a connection to it. Consequently, ATO-OB will ask ATO-TS if it has a mission assigned to him. 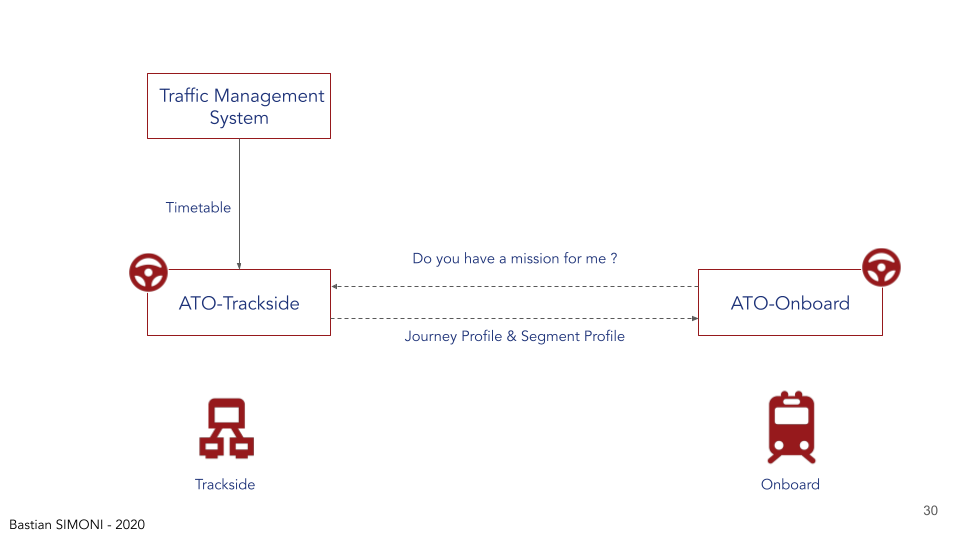 Onboard ATO : let the autopilot drive

ATO-OB is the onboard autopilot, that will control traction and braking of the train. It is all it can do, this is why the driver remains in the cabin, to take over in case of degraded situation.

ATO-OB will operate the mission, thanks to the Journey and Segment Profile.

Though, the system is called ATO over ETCS. Where does ETCS play its role ?

The driver has to respect at all times the signals that are presented to him. If he does not, then the onboard ETCS automatically applies the emergency brake.

Thus, ATO has to drive according to the signalling information that is provided to it by the onboard ETCS. If it does not, then as with a driver, the onboard ETCS will apply the emergency brake. 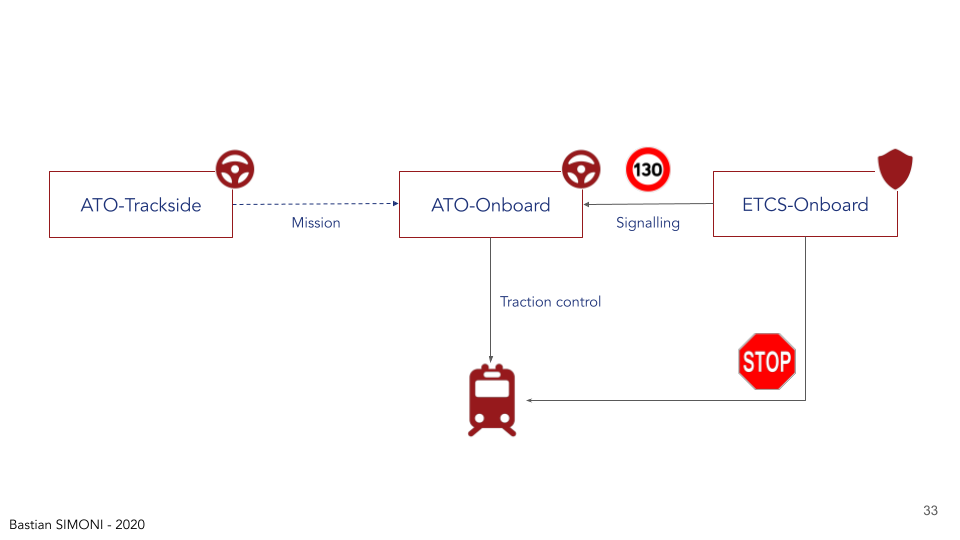 The ATO-OB has a great advantage : it has a very wide view on the route thanks to the track characteristics provided by the Segment Profile (gradient and curves). Furthermore, ATO-OB is configured by the driver will all train characteristics (train category, mass, length).

With all these data, the algorithm is capable of a fine control of the traction and braking, and to coast at all possible moments. Coasting is when the train is moving without any traction, just from benefiting from its inertia, and this is saving energy !

In a presentation given in 2017 at the European Rail Agency, two examples show possible energy consumption reduction, by harmonizing the driving profile for a given fleet of trains : 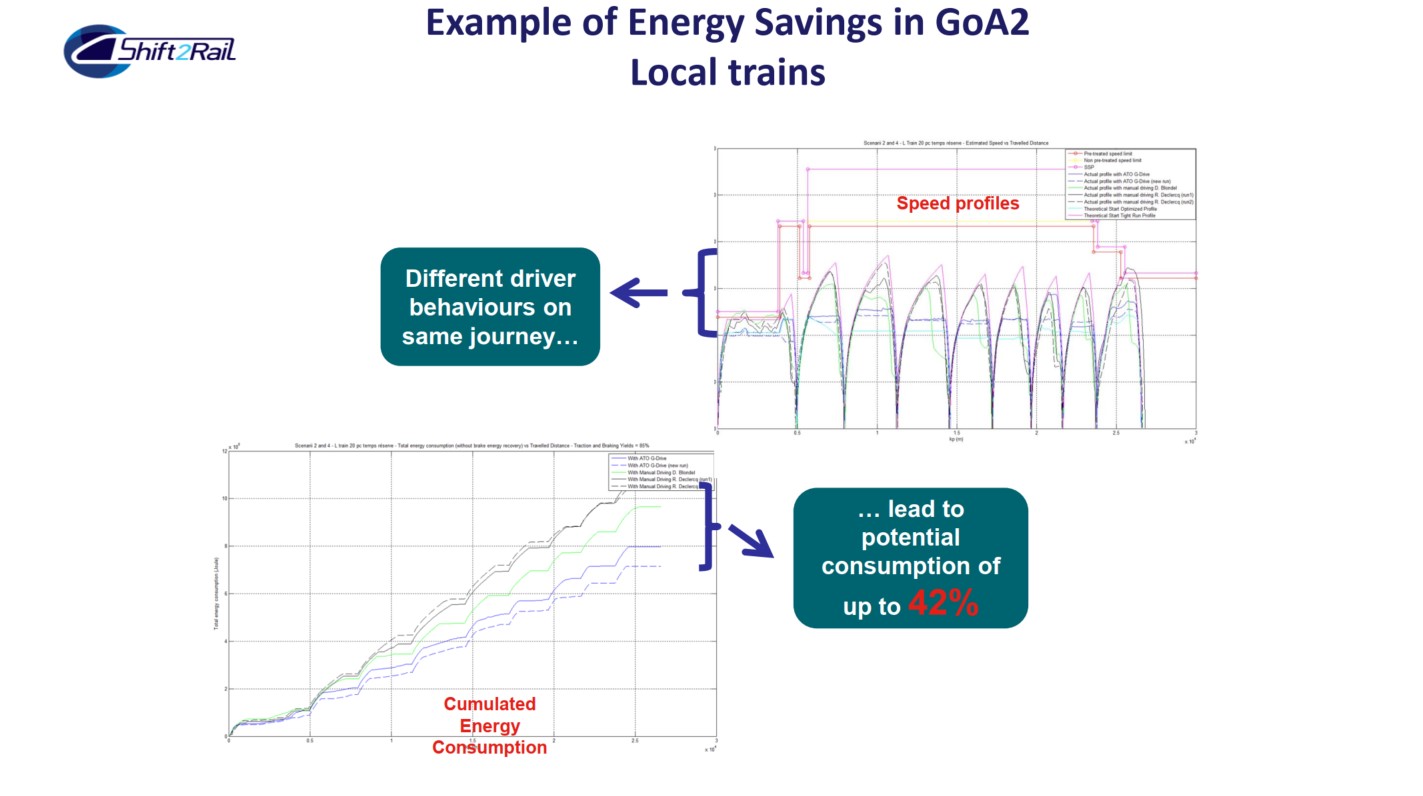 Interaction with the driver

ATO is a new system for the driver. The interaction between them has to be fluid, to avoid adding complexity to the driver. ATO over ETCS uses the ETCS interface, the Driver-Machine Interface (DMI), to display data related to the mission (time, next stopping point). The driver can engage and disengage ATO by pressing buttons on the interface.

ATO over ETCS has been specified to ensure that it can be used without any difficulties on the whole european railway network. Thereby, the system architecture, and the interfaces, are described in an open and standard set of documents. The ATO over ETCS elements are interchangeable : an ATO-TS from Hitachi will work with an ATO-OB from Alstom.

The ATO over ETCS specification is currently in the final stage before being integrated within the 2022 Technical Specification for Interoperability – Control-Command and Signalling.

This means, that every user will have to be in line with this standard. Suppliers will conceive compliant solutions, so to avoid any proprietary system. The ATO over ETCS system will be the same overall Europe, so to ensure interoperability. 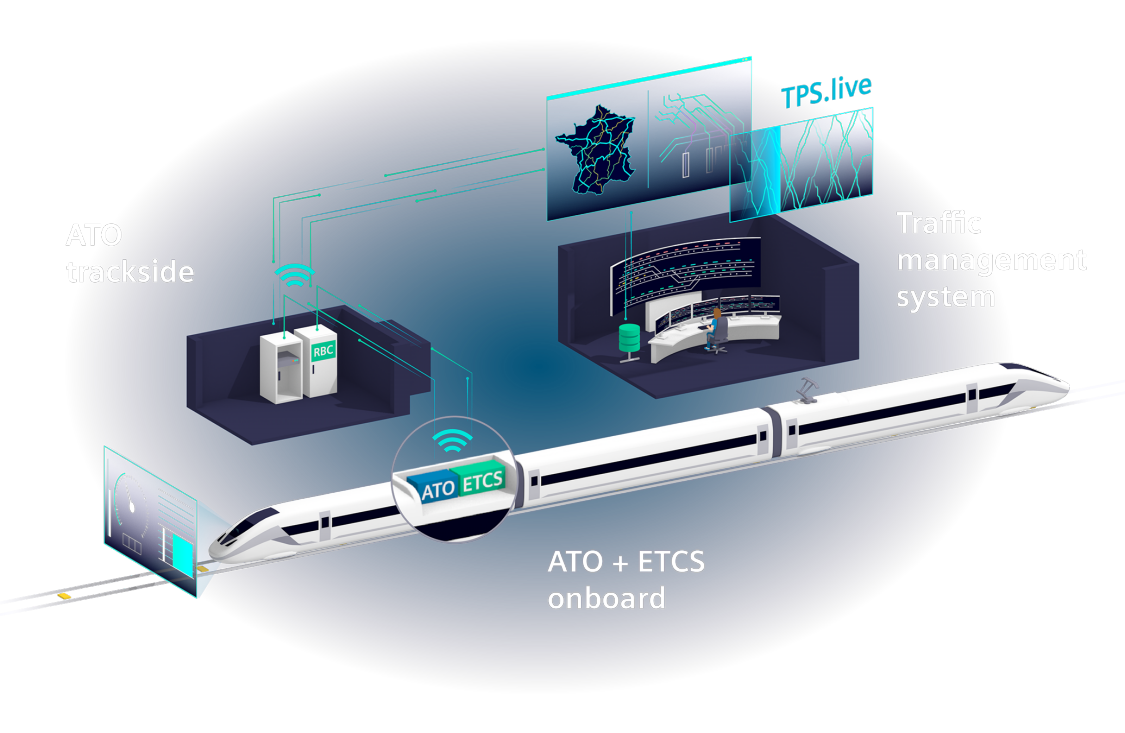 ATO over ETCS, with equipment onboard and trackside. Credit : SIEMENS.

The starting point is the train we want to pilot, to operate the mission. For that, we need an adapter, as existing trains are only meant to be driven via the driver’s desk !

ATO commands traction and braking to the adapter, while respecting signalling orders coming from ETCS.

The architecture in depth 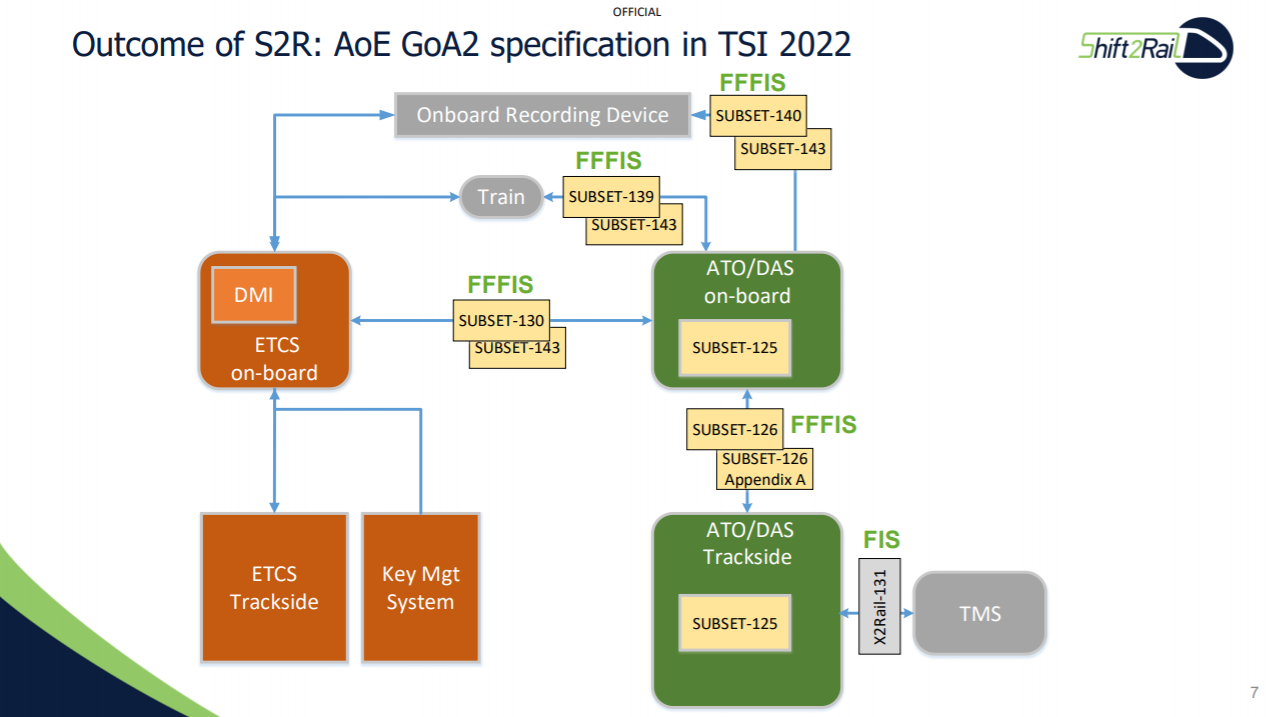 The above figure represents the architecture of the complete system :

On this architecture, we can identify the internal and external interfaces of ATO over ETCS. FFFIS (Form-Fit Function Interface Specification) interfaces enable a complete interchangeability and interoperability of components.

The only internal interface is the link between trackside and onboard ATO : SUBSET 126. This interface enables the transmission of the Journey and Segment Profiles. Appendix A of SUBSET 126 specifies the use of GSM-R.

In order to fetch the timetable, ATO-TS is connected to the TMS via interface X2RAIL-131. This interface is not standardized, as most of TMS are specific and legacy systems. Adapters are necessary to get the information the ATO-TS needs.

To avoid any ETCS emergency braking application, the ATO-OB respects the signalling information given by ETCS onboard via interface SUBSET 130. Current onboard ETCS equipment is unable to provide this interface, as SUBSET 130 is new. A change request towards ETCS has been formulated, so that future ETCS equipment can provide this new interface : it is Change Request 1238. For now, adapters between ETCS and ATO are necessary to provide the interface.

When ATO controls traction and braking of the train, it is communicating with the control equipment of the train, using interface SUBSET 139. As current trains are only meant to be driven using the control desk in the cabin, adapters are here again necessary.

Finally, ATO-OB communicates with the juridical recorder via interface SUBSET 140.

Engineering rules for all interfaces are described in SUBSET 143.

All these SUBSET will be in open-access, when validated by the Union.

ATO over ETCS : a prototyped and tested system

During the conception of the system and its documentation, suppliers realized prototypes.

These prototypes have been tested on test benches, so to validate interoperability between the components. For each reference test, ETCS-OB, ATO-TS and ATO-OB equipment was supplied by a different partner. ATO over ETCS has also been tested on a test train in the UK. The following video gives an overview of these tests.

The algorithm within ATO, that drives the traction and braking of the train, has to adapt depending on the type of train. A regional train, high-speed train or freight train is not driven the same way !

These differences in driving trains are called driving styles. These driving styles are supplier’s know-how, and are differentiating factors between the different ATOs on the market.

However, ATO over ETCS experiments conducted on freight trains, highlighted the difficulty to pull freight wagons without risks [1]. This led the ATO over ETCS working group to exclude freight use case of the 2022 revision of the TSI.

The blind spot : the long-lasting deployment of ERTMS/ETCS

This situation is difficult for railway undertakings willing to use automatic driving on the mainline network, and is delaying the adoption of ATO over ETCS. The energy crisis of 2022, particularly impacting for railway competitiveness, needs quick answers to avoid a reduction of the modal shift towards rail. Automatic driving, thanks to its energy consumption reduction, is a natural solution. This is in favour of a massive deployment and use of ATO over ETCS, even on lines that are not yet equipped with ERTMS/ETCS.

In the Netherlands, NS, helped by CAF SIGNALLING and Prorail, demonstrated ATO over ETCS (GoA2) on a non-ETCS equipped train, and non-ETCS equipped line, by using trackside information from the interlocking system, lineside signalling perception, and onboard ATB information, all fused by an ATO-ADAPTER delivering SUBSET-130. [1]

In 2022, M. Carlo M. Borghini, Head of Europe’s Rail Joint Undertaking, showed his enthousiasm about NS’s experiment, and the opportunity to use standard solution ATO over ETCS, even on lines that are not yet equipped with ERTMS/ETCS. [2]

Seing an opportunity to accelerate the adoption of ATO over ETCS, the European Commission opened a new program within Shift2Rail, to define a concept enabling ATO over ETCS via a lineside signalling perception and interpretation device. This is seen as a Technology supporting migration to ATO over ETCS. [3] 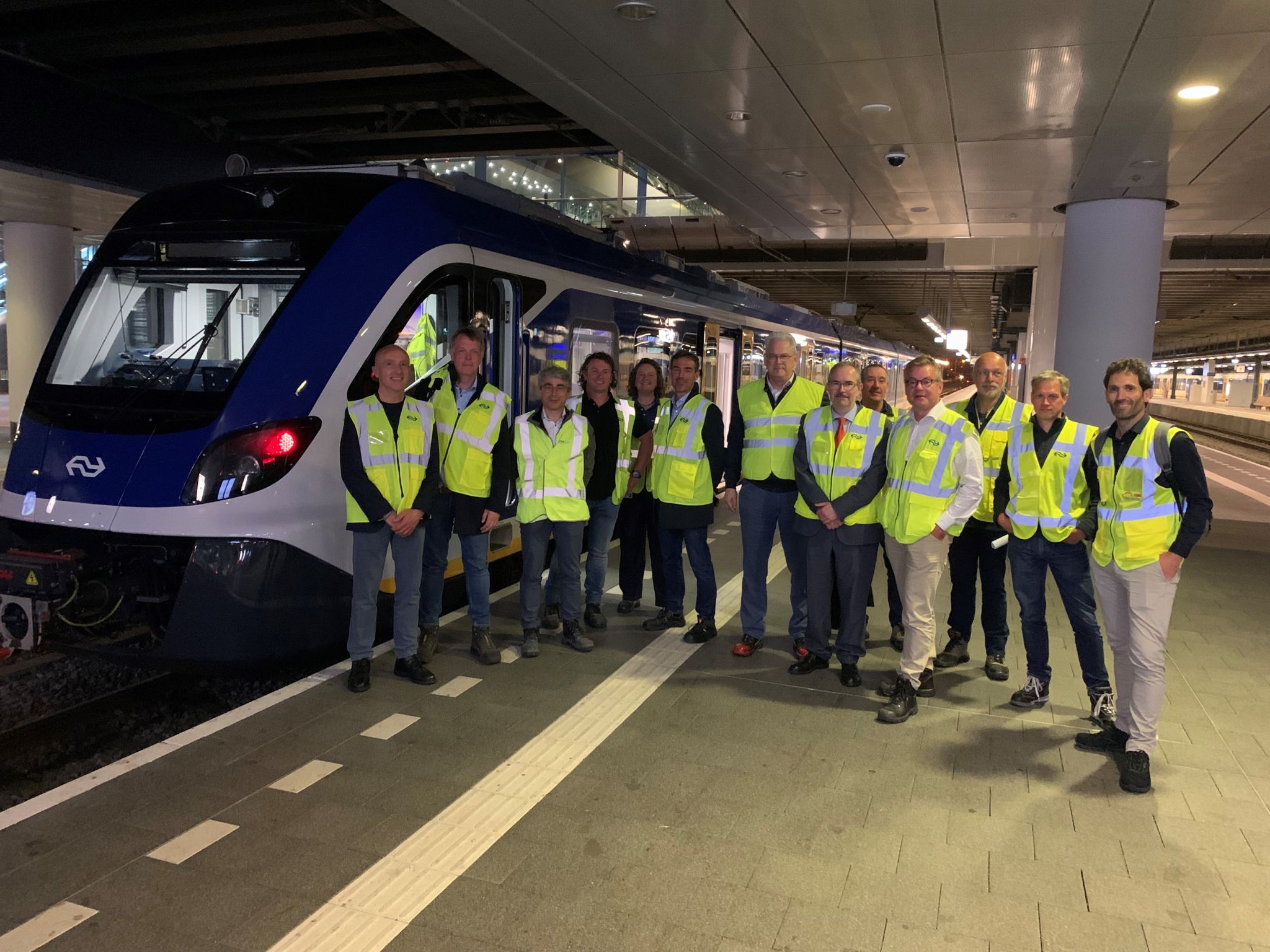 Thanks to automatic traction and braking, ATO over ETCS is the foundation of the autonomous train. This system enables GoA2 operation for multiple use cases : suburban, regional, high-speed. Additionnal investigation is necessary for the specification of the standard solution for freight trains.

The 2022 energy crisis, very impacting for rail competitiveness, is a threat to the modal shift towards rail. ATO over ETCS, thanks to its energy savings, is a solution to a tangible problem. However, its necessity to use ERTMS/ETCS and especially the trackside part of it, delays the adoption of ATO over ETCS, as ERTMS/ETCS rollout takes time and money.

To face this issue, migration solutions are investigated by railway undertakings. The use of existing systems, abstracted by an ATO-ADAPTOR delivering SUBSET-130, has been tested by NS helped by CAF SIGNALLING and Prorail. In France, ATO over ETCS has been tested by SNCF, ALSTOM and HITACHI, using lineside perception and interpretation.

A standard solution is being investigated at European level, enabling the use of ATO over ETCS, on lines that are not yet equipped with ERTMS/ETCS. The idea is to support ATO over ETCS using lineside signalling.

ERTMS/ETCS specifications : available in the library.

ATO over ETCS (GoA2) specifications : available in the library.